Each month guitar picker and Webmaster Bob Howe brings you the latest Country Music happenings on the Internet.
You can surf your way from month to month, or why not bookmark the main index for the complete contents!
Join our mailing list below for notification of each new column.
Country Music Artists and Entertainers .... click here .... to find out how to get your OWN Web page!
Cowboys In Cyberspace - October 2001 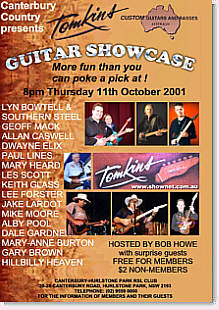 Allan Tomkins has had his fair share of E-mail from other people around the world named Tomkins, including some who are guitar players. The Tomkins Custom Guitars and Basses Web site is expanding rapidly at the moment. There are photos from Allan's recent trip to America, Dale Watson playing his new Tomkins guitar on the Grand Ole Opry, and an ever-increasing number of profiles of pickers who choose to play a Tomkins. Many of those top local players and singers will be converging in Sydney on October 11th for a Tomkins Guitar Showcase at Canterbury-Hurlstone Park RSL Club. They include Lyn Bowtell & Southern Steel, Geoff Mack, Allan Caswell, Dwayne Elix, Paul Lines, Mary Heard, Mary-Anne Burton, Les Scott, Lee Forster, Jake Lardot, Alby Pool, Keith Glass and Dale Gardner. Full details can be found at the Web site.

'What's the address of that Web site?' I hear you ask. Some of you may be first time visitors to this Web site , so I'll explain. Every month you will find a copy of this column in print in the new-look Capital News magazine. The articles are duplicated here with all the links embedded, just waiting for you to click on them. How easy is that? Sometimes you'll also find here, some extra info, photos, hints that aren't in the magazine, or free music to download.

There are plenty of other new and updated sites for you to check out this month. Here are just some of them:

Six-time Golden Guitar winner Colin Buchanan is working on a new Country album. The first single 'Land Of The Getaway' is just out and available exclusively through Colin's Web site, which is undergoing some exciting changes. He also has a separate site, Aussie Praise For Kids, devoted to his unique style of fun sing-a-longs that help kids worship the Lord.

Virtual Muster - well it's not quite the same as being there, but you will find hundreds of photos and some audio interviews with the stars and the audience of the recent Toyota National Country Music Muster.

Almost like being there - The Fiddlers Festival recently toured Japan. Their mate Keisuke has set up some great music and video on the Live Café site so you can watch Andrew, Clare, Mark, Marcus and Michael in action.

Johnny Green's Blues Cowboys are vintage musos playing vintage songs on vintage gear. Their Web site is full of style and wit that accurately portrays what that are all about - tearin' it up on the Lost Highway.

Australian singer-songwriter Simon Bruce has opened shows for Tommy Emmanuel, here and in America. His current CD was produced by Tommy in Nashville, with Simon on vocals, guitar and harmonica, Tommy on drums, guitar and bass, and Keith Urban on backing vocals. He was sixteen at the time! Check out Simon's Web site and see what the future holds for this young talent.

Harvey Dickson's Country Music Centre is 5km from Boyup Brook in Western Australia. They have live shows and the Record Room, with its abundance of Elvis Presley memorabilia. Outside, three 45-foot Guitar Men tower over this popular tourist stop. If you can't get there in person, drop in on your trip along the Internet highway.

If you want to see outstanding graphic design style, surf on over to Lonestar's Web site. Get into their elevator, press the buttons, and be transported to the different 'floors' of the site. Cool. In the words of their U.S. chart-topping album, I'm Already There.

The Folk Den is a part of Roger McGuinn's Web site where he uses '...the medium of the World Wide Web to continue the tradition of the folk process, that is the telling of stories, and singing of songs, passed on from one generation to another by word of mouth'. Every month a 'new' folk song is uploaded as a Global Community Service, and you can trace many Country roots in these tunes. McGuinn has now expanded the concept one step further; armed with a computer, a microphone and digital recording software, he travelled around and rerecorded 18 of the songs as duets with several legends of the folk genre. Joan Baez, Pete Seeger, Odetta, Judy Collins and many more performers join him on the CD 'Treasures From The Folk Den'. Technology meets tradition, indeed!

If you want to share the location of an interesting site you've seen or request a topic for discussion in future columns, why not E-mail me.

Don't forget to listen out for cyberBob each month on the radio waves with Belinda Miller of Murri Country, 4AAA (98.9 FM in Brisbane) and Barbara Morison on 2SER (107.3 FM in Sydney). Until next time, happy surfing.

Would YOU would like to be added to our FREE mailing list and be automatically notified each time a new Cowboys in Cyberspace article appears on the web?
Just enter your E-mail address (and/or comments) here and click the button once!
(If your browser doesn't support 'forms', E-mail us above)

Back to top of this page

You can use this box to search this site for your favourite Country Music artist...
...or if you want to search the World Wide Web...
...type their name into this search engine box and then press the GOOGLE SEARCH button.....