Each month guitar picker and Webmaster Bob Howe brings you the latest Country Music happenings on the Internet.
You can surf your way from month to month, or why not bookmark the main index for the complete contents!
Join our mailing list below for notification of each new column.
Country Music Artists and Entertainers .... click here .... to find out how to get your OWN Web page!
Cowboys In Cyberspace - February 2003

As the Northern hemisphere chills and their concert circuit cools off, down here in the sunshine we reap the benefits of being an attractive touring destination. Many artists, country and otherwise, are visiting us this summer, so let's return the compliment and pay them a visit...electronically, that is.

A Canadian contingent has joined us in Tamworth this year. MICHELLE WRIGHT has a host of awards to her credit, including multiple Canadian CMA trophies for Female Vocalist and Entertainer of the Year. She tells us, "I've always hoped to make it to Australia, so it's great that I'm finally getting a chance to visit this spectacular country and share my music with the Australian audiences." At her Web site Michelle shares not only her music, but also her wedding pictures and a moving online journal of her trip to Zambia with World Vision.

JASON MCCOY is making his second sojourn down-under and excited to be back with us again. At his site you can currently see a slideshow of photos from his last visit - no doubt soon to be replaced by an updated version. Jason is pictured right, with a new custom-made Australian TOMKINS guitar, emblazoned with the Canadian national emblem, the maple leaf.
Photo by Bob Howe.

FRED EAGLESMITH is another repeat visitor and sure to increase his following again with his idiosyncratic style and dry humour that charmed us last year. Fred's Web site has grown since then and still remains the definitive launch pad for all the Fredheads of the world.

THE WILKINSONS amazing success in Canada and the USA has brought the family trio dozens of nominations, awards and honours in the past few years. Their Web site has always been geared for their many fans. Steve Wilkinson says, "...from our Australian friends like Keith Urban and Sherri Austin we know that there countless country fans there (in Australia) and we can't wait to perform for the folks".

Steve Wilkinson cites JAMES TAYLOR as one of the many influences on his musical career and that would no doubt be true of many of the current crop of Country singer-songwriters. Although not appearing in Tamworth, James Taylor is touring the Australian Capital cities from the end of January into February. On the Web you can choose between the very stylish Sony Music official JT site and the more informative unofficial site, JAMES TAYLOR ONLINE, that has been online since 1994.

In turn, James Taylor and every artist of his generation would cite BOB DYLAN as a major influence. Dylan has transcended every style of music over the years from folk to rock, stone country in Nashville, gospel, blues…take your pick. BobDylan.com has long been a benchmark of how good an artist's Web site can be. In particular check the 'Performances' page where you can hear rare live and studio recordings from recent tours and yesteryear. There are also cover versions of his songs and original recordings of artists who influenced him - a rare treat indeed.

'His Bobness' also visits us in February and the guests on his shows include local band The Waifs and American punk folksinger Ani DiFranco. (click for tour dates) At THE WAIFS Web site we learn that at the age of 15 years, Donna learnt how to play guitar from her dad. The first song she ever learnt was Dylan's The Times They Are A-Changin' and she was hooked. With her sister Vikki and NSW farm boy Josh, who they met up with in 1992 at Broome, they now have a loyal following and a robust touring schedule that has recently included the Woodford Folk Festival in Qld the Vintage Blues Festival in WA, the Big Day Out, the Tamworth Festival in NSW, Womadelaide in SA, the Port Fairy Folk Festival in Victoria...the list goes on! Surely a testament to their wide appeal that will keep them in good stead when they tour the USA and Canada later this year.

JACKSON BROWNE is another welcome visitor to our shores. Since his self-titled debut album in 1972 he has been a major influence on songwriters everywhere. His second album contained Take It Easy, co-written with Glen Frey, which became The Eagles' breakthrough hit. His latest, The Naked Ride Home is his 13th album, and "catalogues the human condition with a grace and brilliance that have become trademarks of Browne's work". His Web site gives an excellent overview of his body of work and for an international flavour, includes translations of his latest lyrics into Spanish, German, Italian and soon French and Japanese! 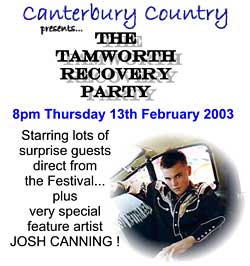 JOSH CANNING has released his debut EP Strong Enough, co-produced by Bill Chambers and Audrey. Check out Josh's Web site that is designed to resemble a vintage television set. The look is retro but Josh is a fresh new talent, destined for big things.

In celebration of the success of his album Sand & Sea, the DAVE PRIOR Web site has been given a new look. You'll find a selection of songs in MP3 format from this latest album and a full run down and track listings from Sand & Sea as well as Dave's highly acclaimed, first album Wind in the Wire.

ROD ESAM is also enjoying chart success with the track Back Outback from his album Earthmover. Learn more about Rod's solo career and The Rovers and Drovers Australiana Show at his well-designed site.

One of our finest musical talents and a world-class guitarist, PHIL EMMANUEL has a new site. Highly recommended as the place to watch for news on Phil's gigs and album releases. As rock historian Glenn A. Baker eloquently puts it, "...his passion is illuminating, his ability is breathtaking".

Until next month, happy surfing!

Don't forget to listen out for cyberBob each month on the radio waves with Belinda Miller of Murri Country, 4AAA (98.9 FM in Brisbane) and Barbara Morison on 2SER (107.3 FM in Sydney).

If you want to share the location of an interesting site you've seen or request a topic for discussion in future columns, why not E-mail me.

Would YOU would like to be added to our FREE mailing list and be automatically notified each time a new Cowboys in Cyberspace article appears on the web?
Just enter your E-mail address (and/or comments) here and click the button once!
(If your browser doesn't support 'forms', E-mail us above)

Back to top of this page

You can use this box to search this site for your favourite Country Music artist...
...or if you want to search the World Wide Web...
...type their name into this search engine box and then press the GOOGLE SEARCH button.....